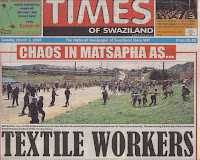 Swazi police rampaged against factory strikers and tear-gassed and assaulted innocent women, injuring two who needed hospital treatment, according to Swaziland’s only independent news media, the Times of Swaziland.

Or according to the Swazi Observer, the newspaper owned indirectly by the Swazi Royal Family, police dispersed ‘unruly’ demonstrators who were ‘drunk’. No one was injured.

This is the story of a strike by 16,000 textile workers in Swaziland, who after going through an extremely lengthy process with the court, held a legal strike against their employers after a deadlock in pay talks. Most of the workers earn as little as E400 (about 60 US Dollars) per fortnight, according to the Times report.

The whole of Swaziland’s textile industry is reportedly affected by the strike.

The Times of Swaziland reported yesterday (Tuesday 4 March 2008) that the two women were injured ‘after the police provoked a riot’ among the textile workers ‘when they deliberately fired tear gas during their march for no reason’.

The Times, which published photographs of the tear gas attack and a picture of a woman being attacked by two police officers dressed in riot gear, gave a detailed account of the police attack on textile workers.

The Times reported, ‘Some were beaten or briefly taken to the Sigodvweni Police Station for minor cases like jaywalking and these were mostly men.’

The Times report continued,
‘One woman who was allegedly assaulted by the police a few minutes after the tear gas was fired, was heard complaining that she was assaulted for nothing as she was seated waiting for her friends.

‘She said the police had been patrolling every street at the industrial area [in Matsapha] yesterday, she did not think they would find her a threat but they assaulted her on the right hand with the baton.

‘When the tear gas was fired, the workers screamed and ran for dear life.’

It seems that the police attack was unplanned because the Times reports that other police who were standing nearby the tear-gassed demonstrators jumped in their vehicles and drove away at high speed, presumably to escape being gassed themselves.

The Times report continued,
‘The workers ran in all directions and tear gas was fired even after they had left the road about 200 metres away.

‘The police officers in riot gear later left the scene followed by women shouting unsavoury remarks at them. The officers proudly shouted back and warned the strikers they would be back.’

The Times noted that many of the police who attacked the textile workers were the same ones who attacked university students in January (2008).

The Swazi Observer newspaper saw none of this. As far as the Observer was concerned yesterday (Tuesday 4 March 2008) the main story of the day was the traffic disruptions that were caused by the demonstrating workers.

The Observer painted a picture of the strikers as unruly and out of control. It reported traffic police officers who had ‘a tough time controlling the supercharged demonstrators’.

The Observer report continued,
‘However, the mass demonstrations began to lose momentum at around 11am when police officers from the Operational Support Services Unit (OSSU) decided to disperse the demonstrators who had suddenly turned out to be unruly with teargas.

‘By then a fraction of the demonstrators were drunk as they had taken the traditional marula brew and were uttering insults and expletives at people passing by and to police officers themselves.

‘The tear gas was sprayed at a crucial moment, when some of the union leaders had just left to seek official permission to stage the demonstrations at the Matsapha town board.’

The two news reports could have come from entirely different events. The Times saw Swazi police out of control assaulting innocent women for no reason at all. The Observer saw unruly and drunk demonstrators.

(One small point struck me as curious. The Times went out of its way to say that the OSSU were not involved and yet the Observer clearly identified the OSSU as the group which tear-gassed the demonstrators.)

I wonder if really the reporters saw what they wanted to see. The Observer is a newspaper that directly supports the people who fund it (the Swazi Royal family and others close to Swaziland’s ruling elite) so it is unlikely that the Observer would support any activity that undermines the status quo in the kingdom.

At present Swaziland is an unstable kingdom. Not only does it suffer from the highest rate of HIV infection in the world it has huge problems with poverty and disadvantage.

Many groups, which have been in the past reluctant to speak out against poor conditions, are now becoming vocal. In the past year there have been attempts to create trade unions for junior members of the police force, the army and the correctional service (prison service). All of these attempts have been met with threats and intimidation from those in authority.

The textile workers are just the latest who have taken to the streets to demand their rights. Last July (2007) there was a two-day national strike to protest about working conditions and also to demand that political parties be allowed in Swaziland.

The textile workers strike is not over, with more demonstrations planned. We should all look on with interest to see what the police and their supporters in the media have planned for us next.

Posted by Publisher: Richard Rooney at 07:37

Really nuanced reading of the articles! The "unplanned attack" by some of the police force is interesting, any further information on that?

When I wrote that it appeared that the ‘police attack was unplanned’ I didn’t mean to say that they didn’t plan to use teargas because obviously they did since Swazi police always throw teargas.

My point was more about the tactics of the police. They hadn’t planned HOW to use the teargas. If they had they wouldn’t have fired it at their own colleagues.

Swazi police are generally undisciplined. Anyone who witnesses them in action when they have to deal with a large crowd can tell this. Their first instinct is to disperse the crowd with teargas. They have no training in management of large groups, nor as far as I can tell do they want to. The police are the agents of a repressive state. The monarchy and its supporters want people to know that if you get out of line you will suffer for it.

The textile workers knew they would be attacked and one must admire their courage in sticking up for their rights in such difficult circumstances.