King Mswati III the absolute ruler of impoverished Swaziland took delivery of his second private jet on Friday amid secrecy about the true cost of its purchase.

The A340-300 Airbus was flown into King Mswati III Airport with great fanfare just days before he was due to celebrate his 50th birthday.

Mbongeni Mbingo, Managing Editor of the Swazi Observer Group, newspapers in effect owned by the King, wrote on Sunday (15 April 2018), ‘The buzz that filled the VIP Airport was one of sheer excitement as authorities, including those from the King’s Office, marvelled at the Airbus A340-300 which stood there monstrously.’

He added, ‘It was as if it was a statement of its own, the sheer size of this new state aircraft fitting the status of the head of state, and justifying the need for the country to go in search of a plane to cater for His Majesty the King’s international trips.’

King Mswati rules Swaziland as sub-Saharan Africa’s last absolute monarch. Political parties are banned from taking part in elections and opponents are prosecuted under the Suppression of Terrorism Act.

It has been widely reported within Swaziland and elsewhere that the 17-year-old plane cost US$13.2 million to purchase from China Airlines in Taiwan. The A340 Airbus is a long-range wide-bodied passenger plane. Usually, it seats 375 passengers and has a range of 12,400 to 16,700 km (7,700 to 10,400 miles). Following the purchase, the Airbus was completely refurbished. With the upgrades it could now be worth as much as US$30 million, but it has not been revealed how much the upgrades cost or where the work was carried out. It was reported on the website CH Aviation that the plane flew into Swaziland from Hamburg, Germany.

In 2015, Luftfahrt-Versicherungslosungen AG of Zurich, Switzerland, a specialist aviation brokerage company, was tasked with finding insurance cover for the aircraft. It reported at the time the ‘agreed value’ of the plane to be US$15 million. It added, ‘Agreed value at inception will be US$15 million increasing to US$30 million during completion work over the next 11 to 12 months.’

Industry insiders said at the time the refurbishment costs could be more than anticipated by Luftfahrt-Versicherungslosungen, depending on the degree of luxury the King demanded. Plans were drawn up to build a state room, a lounge and a royal lavatory on the aircraft. Similar planes with ‘VIP’ upgrades of their interior were being offered for sale on the Internet for US$44 million.

A special hangar for the plane is to be built at King Mswati III International Airport at a cost of E200 million (US$16.6 million), to house the Airbus and the King’s other plane, a smaller modified McDonnel Douglas DC-9-87, also known as an MD-87. That plane cost US$9.5 million in 2012.

King Mswati has a global reputation for living a lavish lifestyle with fleets of top-of-the-range BMW and Mercedes cars and a Rolls Royce. The King has 13 palaces and he, his family, and their entourage take expensive international trips.  Meanwhile, seven in ten of the King’s 1.1 million subjects live in abject poverty on incomes of less than the equivalent of US$2 per day.

In the week that he took delivery of the plane, Pakistan donated US$1 million to help feed staving children in Swaziland because the Swazi Government says it cannot afford to do so. In 2016 the United States announced it would provide US$6.35 million in drought relief. This was US$1 million less than the deposit paid at the time on the King’s plane. About 300,000 people in Swaziland are still at risk of severe hunger as a result of drought and the government has declared a state of emergency appealing for international aid donations.

There has been no public discussion on how much it will cost to run the Airbus. Swaziland’s economy is in the doldrums and in March 2018 ahead of the national budget the King ordered his ministers ‘to prepare a budget that is based on available resources’. Finance Minister Martin Dlamini said in his budget speech, ‘Government has conducted a thorough analysis of our expenditure in order to prioritise only the most pressing concerns.’
It is possible to make an informed estimation on the ongoing costs of the new plane. This is based on the known costs of the King’s first plane, the much smaller MD-87. Documents seen by Swazi Media Commentary revealed the jet cost US$9.5 million to purchase in 2012 and at least another US$4.1 million was spent on refurbishments before the King took delivery.

In 2012 the King’s company Inchatsavane signed an aircraft management operating agreement with Greek-based Gain Jet Aviation. As part of the deal the King was required to deposit US$500,000, described as ‘average two months operating costs’ to guarantee future payments. On this basis the operating costs of the aircraft would be US$250,000 per month or US$3 million per year. In the six years since the jet has been flying, the operating costs would have reached US$18 million (about E216 million).

The figure set by Gain Jet Aviation was only an estimate. Another estimate of costs of operating an MD-87 is available from Conklin and de Decker, Aviation Information.

Fixed costs are the costs that have to be paid even if the plane never flies. Among the fixed costs it lists are salaries for the pilot, the co-pilot and the flight attendant.

Conklin and de Decker set the variable costs at US$9,736.20 per hour. Variable costs include fuel, maintenance, landing charges at airports, staff expenses and catering.

The US$250,000 per month or US$9,736.20 per hour anticipated for operating costs might be underestimates for the true cost of flying King Mswati’s MD-87.

Gain Jet Aviation invoiced the Swaziland Ministry of Foreign Affairs US$312,500 for a flight in June 2012 from Tokyo (Japan), to Manzini (Swaziland). The flight was spread over two days and included fuel stops in Danang (Vietnam), Male (Maldives), and Dar Es Salaam (Tanzania). The total flying time for the journey was 20 hours 50 minutes. 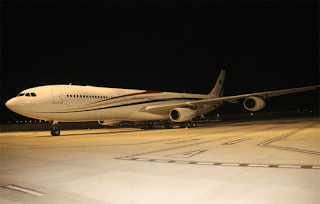 MONEY FOR KING’S JET, BUT NOT DROUGHT
http://swazimedia.blogspot.com/2016/03/money-for-kings-jet-but-not-drought.html

Posted by Publisher: Richard Rooney at 08:37