Both Ramodibedi and Simelane have also been taken into custody. They face a string of charges, including abuse of power.

Details of the allegations against Shongwe have not been released, but he has been at the centre of an Anti-Corruption Commission (ACC) investigation relating to deposits of E2 million (US$200,000) into one of his firm’s bank accounts.

The Chief Justice had dismissed an arrest warrant requested by the ACC against Shongwe last week.

The ACC alleged that in December 2014 a total of E2 million cash was deposited into the minister’s law firm’s trust account. The ACC wrote to Shongwe to ask where the money came from but he did not respond.

The ACC also alleged that E1.3 million of the money had been disbursed from the account.

In a letter to the ACC, Shongwe said the money was being held on trust for a client of his law firm.

Shongwe is also a close ally of the Chief Justice. Ramodibedi and Shongwe are reported to both be at odds with Prime Minister Barnabas Dlamini. Shongwe alleged that at one Cabinet meeting the Prime Minister threatened to kill him.

Picture: PUDEMO
Justice Minister Sibusiso Shongwe, at a police station in Mbabane, Swaziland, after his arrest 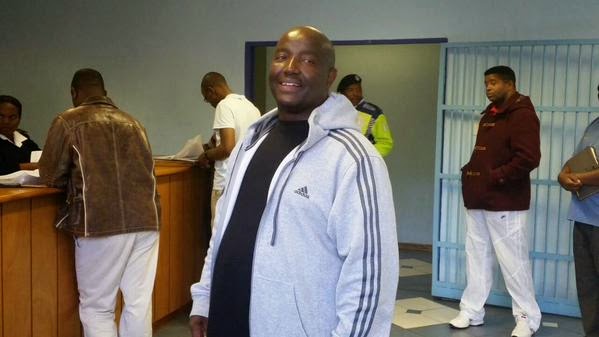 CJ HAS HISTORY OF ABUSE OF POWER
http://swazimedia.blogspot.com/2015/04/cj-has-history-of-abuse-of-power.html