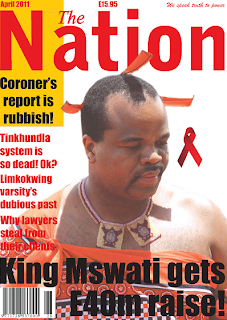 The, Nation, the monthly magazine of news and comment, and the most well-known of Swaziland’s independent journalism voices, is now online.

For the first time the magazine will be available to readers outside of the kingdom, ruled by King Mswati III, sub-Saharan Africa’s last absolute monarch.

Journalists working for broadcast media (all channels that carry news are state-controlled) are heavily censored and the mainstream newspapers – the Observer and the Times of Swaziland group - engage in intense self-censorship. None would dare criticise the king, not even after the events of the past week, for example.

The Nation is different. Journalists bravely tell the truth as they see it. In this month’s issue (April 2011), it carries a long article about how much the Swazi taxpayer has to cough up to keep the king and his royal family in their luxury. The report also contains disturbing information the king’s extravagant lifestyle and how much he is spending decorating his palaces, while three in ten of his subjects are officially so poor they are under-nourished.

There is also an article about the inquest into the death of PUDEMO activist Sipho Jele, who died in state custody in May 2010. The Nation describes the inquest as ‘a disgraceful work of judicial inquiry that should leave any self-respecting Swazi ashamed’.

Posted by Publisher: Richard Rooney at 08:59