JUDGE’S LETTER OF SUSPENSION IN FULL

Here is the letter sent by Chief Justice Michael Ramodibedi to High Court Judge Thomas Masuku informing him of his suspension.

Many of the details of the letter have been reported in the international media today, but some points that I haven’t seen mentioned before include:

Ramodibedi says he is sending the letter on the instruction of King Mswati III, under section 153 (3) of the constitution. It has been said by some lawyers that Ramodibedi was acting unconstitutionally in suspending Masuku.

The letter lists all 12 alleged ‘serious acts of misconduct’ including failure to deliver judgements on time (No 1); not submitting a list of pending judgements each month (No 2); destablisling high court judges and staff [in unspecified ways] (No 6); sending a member of staff to a workshop in Hong Kong without Ramodibedi’s permission (No 7) and by attacking Ramodibedi at an International Commission of Jurists symposium for banning Swazi judges from speaking to the media (No 10). 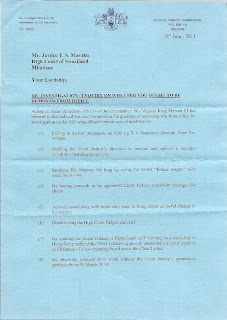 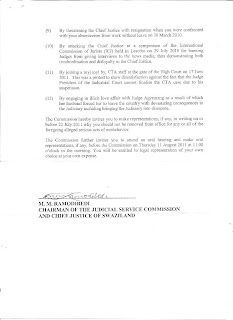 Posted by Publisher: Richard Rooney at 16:06